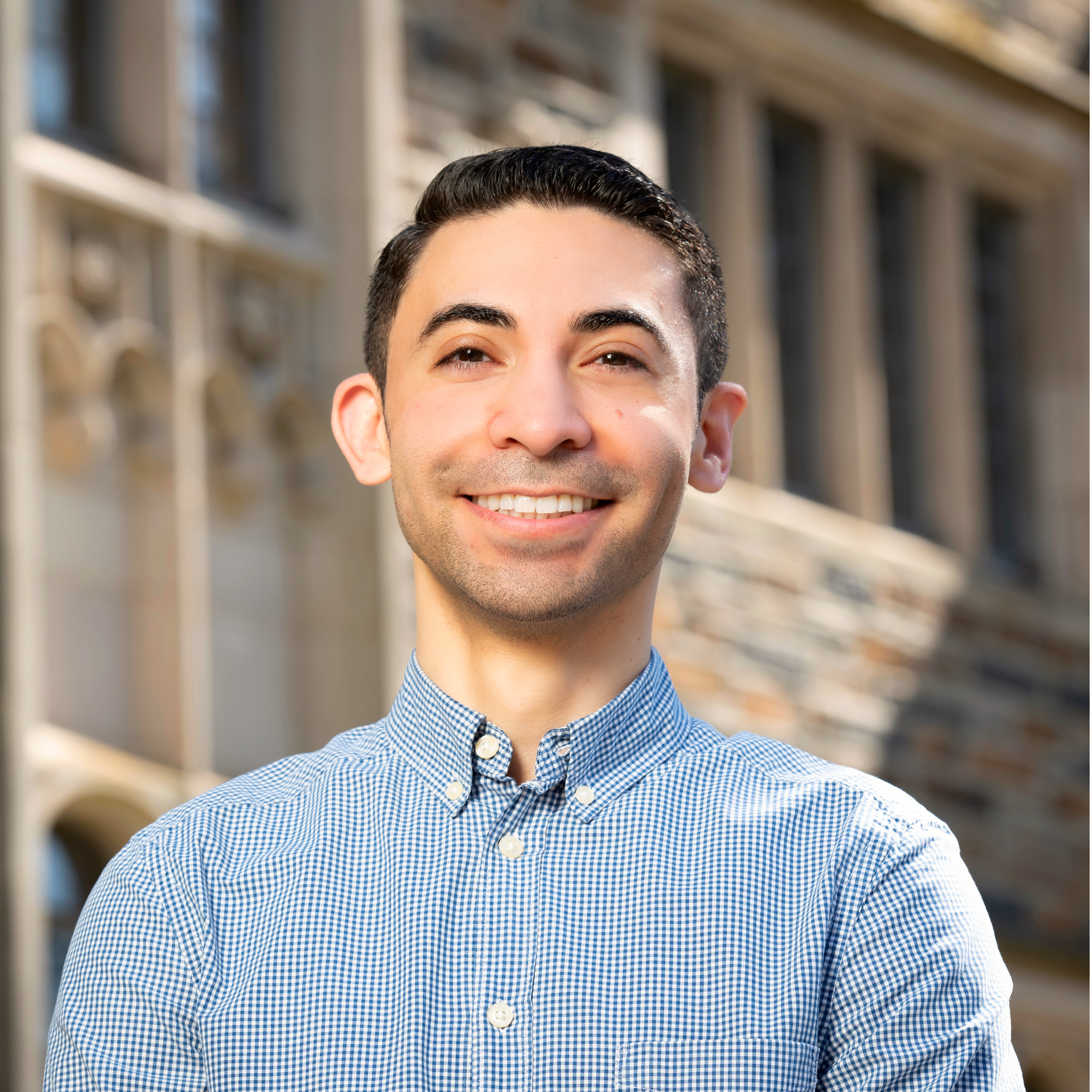 Postdoctoral Researcher at the University of Pennsylvania

Every day, humans make all kinds of decisions that affect their wellbeing and the wellbeing of others. These decisions depend on how people integrate benefits and costs to stay motivated in pursuit of long-term goals. What, then, motivates people to make decisions and why do people differ in these motivations from others as they balance benefits and costs across different environments?

My research takes a multidisciplinary approach to the study of motivation and value in decision making by combining experimental behavioral economics, computational psychiatry, theories from social psychology, neuroimaging techniques, and real-world/field data to understand basic mechanisms of motivated choices and individual differences in how and why people arrive at their decisions. This research ultimately seeks ways to translate into both clinical knowledge and policy insights about human decision making.

Why are some people more motivated than others to pursue rewarding outcomes? How do people integrate different benefits and costs with social contingencies? To investigate these questions, my research examines motivation and value in self-control related decisions. Given the well-established role of dopamine in motivated behavior, I have led and collaborated on studies that directly link dopamine receptors in humans using radioligand PET with individual differences in behavior.

My first-year project as a PhD student examined links between dopamine D2 receptor (D2R) levels and how people discount the value of rewards that are costly, uncertain, or delayed (Castrellon et al., 2019). While we did not observe correlations between these motivated preferences and individual differences in D2R levels among healthy adults, associations were present in clinical populations like people with ADHD and substance use disorders. This indicated that associations between dopamine and revealed preferences depend on psychopathology. 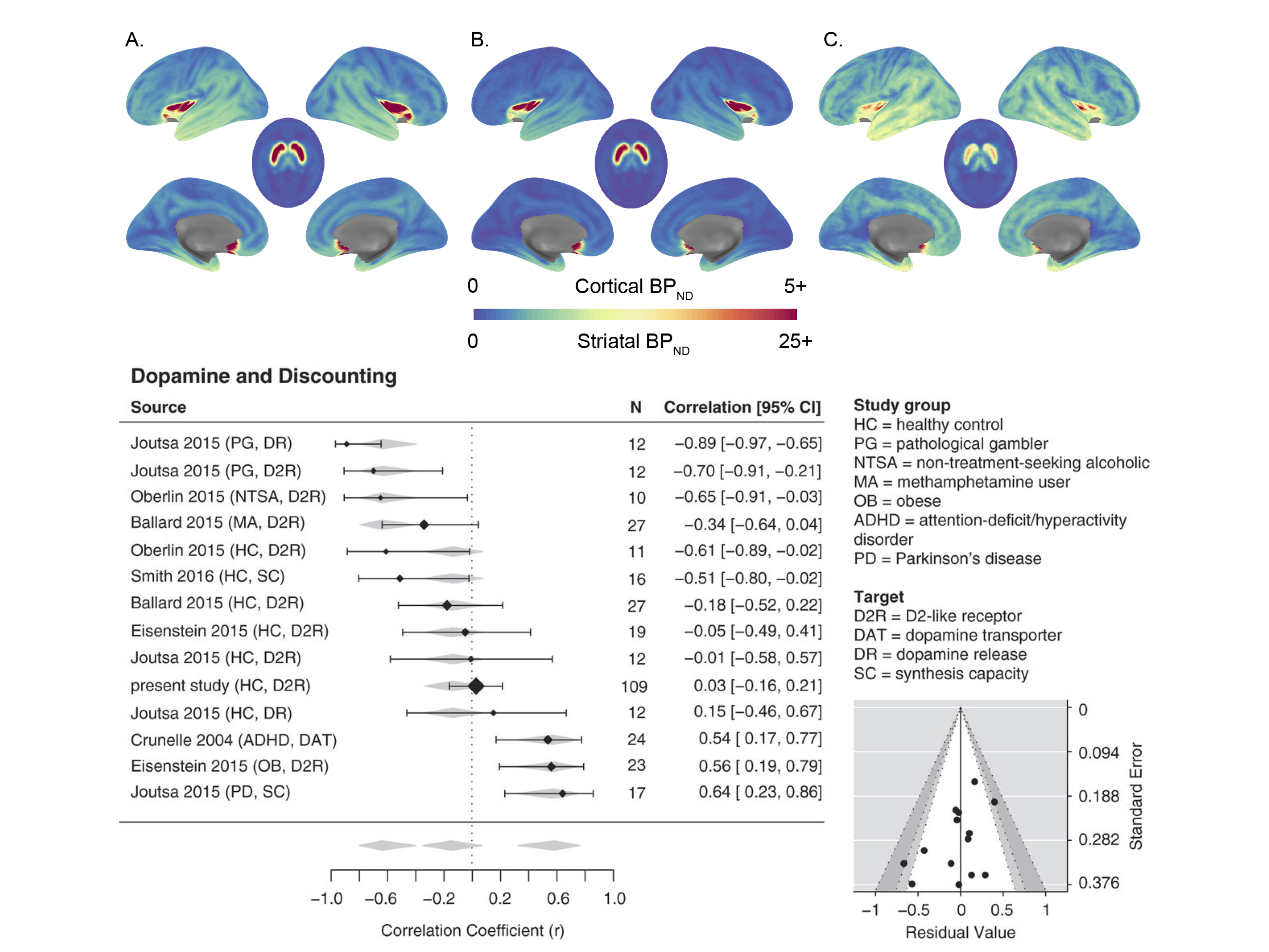 To better understand the source of observed preferences, I led a study that asked whether brain regions that estimate discounted subjective value (the presumed input to choice) are related to D2R levels (Castrellon et al., 2019). This study, combining PET and fMRI with a computational value model, indicated that, indeed, while dopamine may not be directly linked to revealed preferences overall, it is associated with motivational value signals elicited while decisions are made. This study offered a mechanistic account of how dopamine could modulate value signals across the human brain in overlapping neural circuits. This link between dopamine and motivational value confirmed a related fMRI-PET study I collaborated on that linked D2Rs with neural representations of expected value (Dang et al., 2018). 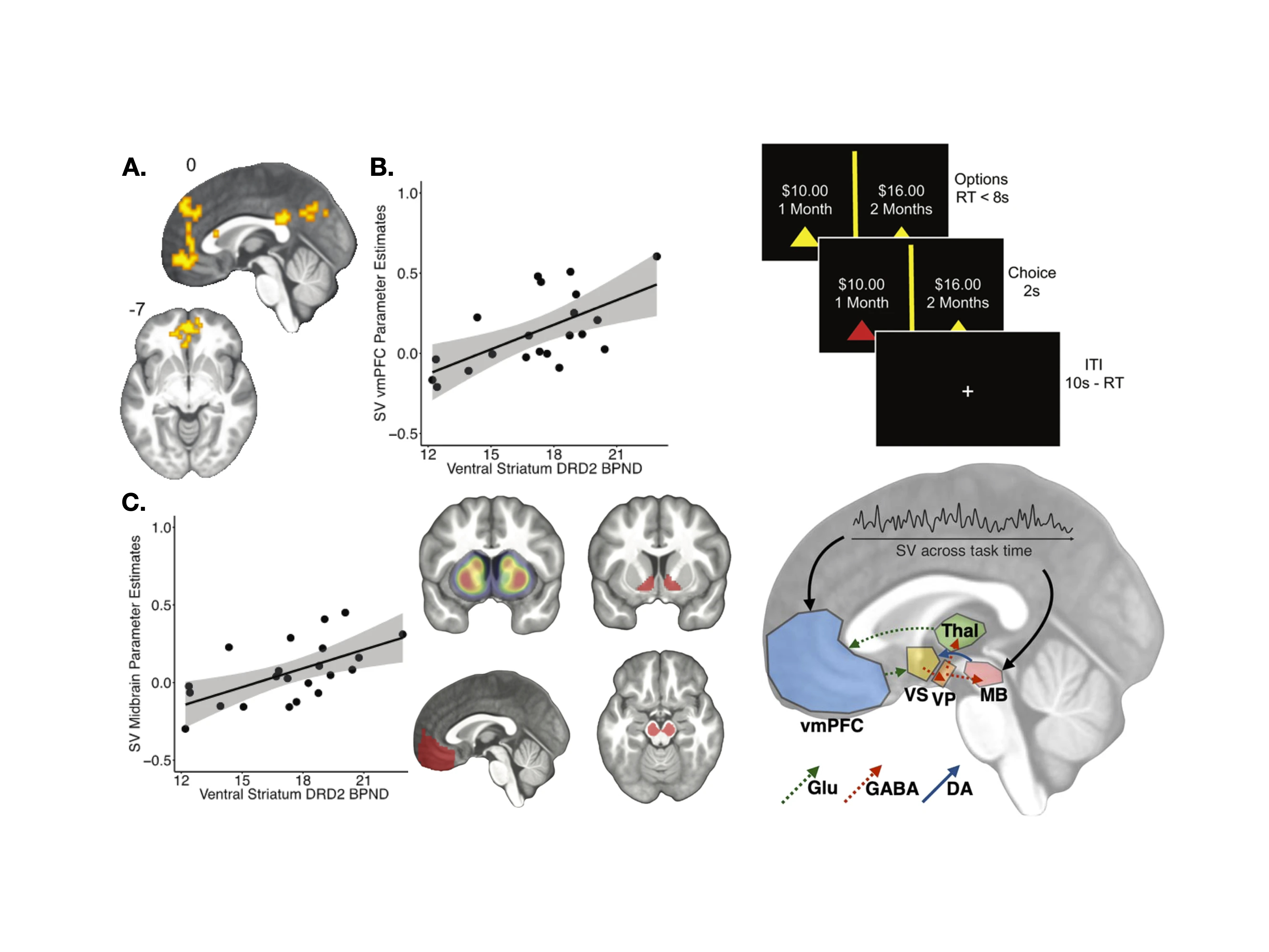 I believe that scientists studying human decisions can benefit from translational insight gained from studying other species. To begin meaningfully engaging with the literature on non-human animals, I led a meta-analysis that evaluated whether pharmacological manipulation of the rat dopamine system using different dopamine-related drugs has unique effects on reward discounting of time delays, uncertainty, and physical effort (Castrellon et al., 2020). In addition to observing that drugs targeting different dopamine binding sites have unique effects on motivated preferences, this meta-analysis indicated that dopamine has similar effects on animals’ preferences over time, probability, and effort. This converged with a study in humans that I collaborated on which similarly indicated that humans’ neural activity associated with subjective value of time, probability, and effort largely overlapped in the same core regions (Seaman et al., 2018), indicating that motivation to overcome these costs are not so different and rely on overlapping neural structures.

I am currently highly interested in whether the mechanisms described above impact the way people engage in costly social behavior. Work I am leading now that combines computational modelling of inequity aversion indicates that individual differences in dopamine D2Rs affect sensitivity to prosocial giving and general preferences for fairness (Society for Neuroeconomics conference poster). Currently, I am applying computational models to test whether D2Rs can make predictions about underlying motivations for fairness according to the Rawlsian theory of justice. I am extending this work with a recently-funded NIH D-SPAN Award (F99/K00). This grant provides early support on my pathway to independence and is allowing me to extend my work on dopamine and motivation to social decision strategies and social learning of benefits and costs in competitive environments.

While the basic studies described above utilize data collected in laboratory settings, I believe that efforts to translate mechanisms within humans into clinical and policy outcomes require ecologically-valid methods. For example, I collaborated on an ecological momentary assessment (EMA) study that provided evidence that aging is associated with better self-control of desires in daily life measured outside the lab (Burr et al., 2020). In a more recent project, I used EMA methods to identify whether individual differences in D2R levels bias decisions to resist spontaneously experienced desires in daily life. We (Castrellon et al., Under review) found that variation in dopamine was not related to how sensitive people are to the strength of their desires but instead to the long-term personal goals they set for themselves. It also indicated that dopamine is sensitive to social context and moderated how susceptible people were to social conformity in resisting temptations. Together with the laboratory studies above, this finding confirmed that dopamine is an important neuromodulator of decision making in humans. These EMA studies offer insight about how to best target interventions that reduce the risk of drug relapse or even manage extreme changes in daily emotions. 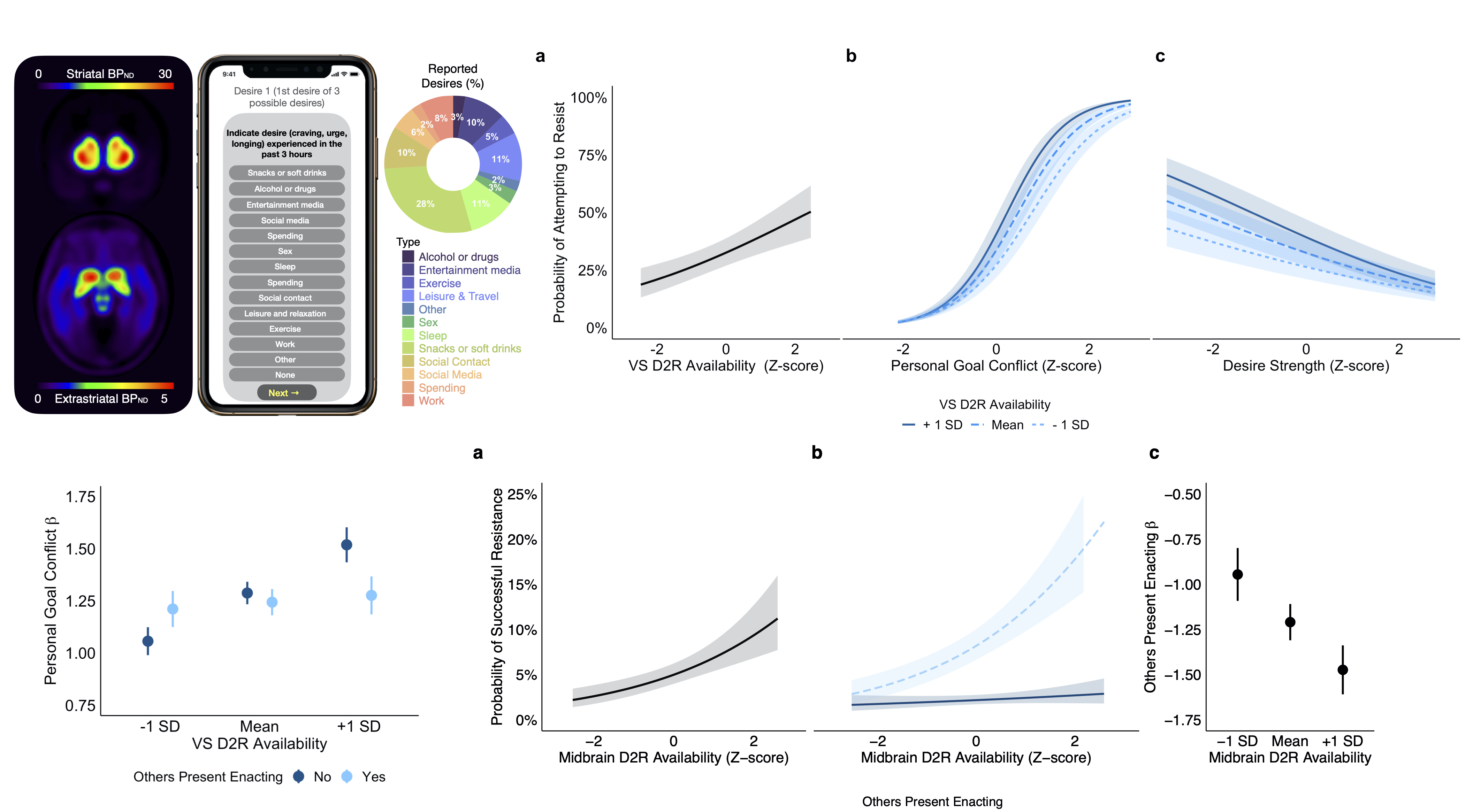 Social decisions studied in the context in which they occur can provide important guidance for legal and social justice policies. For several years, I have been involved in a series of studies in collaboration with legal scholars that examine cognitive and neural processes underlying mock jurors’ biased decisions and their motivations to punish defendants (Castrellon et al., 2022) and (Castrellon et al., 2022). This work, which indicates an important role of social cognition and narrative-based processing inspired me to extend this work in legal decisions elsewhere. For example, I am currently using natural language processing tools to investigate what kinds of arguments motivate Supreme Court Justice decisions. Further, I am leading a large-scale study using advanced computer vision analyses to identify patterns of systemic racism and skin-tone bias in hiring and promotion across industries (e.g., academia, law, medicine, tech, etc.). I have already received competitive internal funding at Duke for this project and am currently pursuing larger grants to support further development. I am complementing this field data with an ongoing study that tests how prosocial giving and preferences for fairness (as described earlier) depend on experiences with discrimination and power in the workplace. I hope that the combination of these field and lab studies provide much needed light on the consequences of biased motivations.